Do you know what the End of Life Choice Act is about?

Nationwide polling on 30 September 2020 shows that 80% of New Zealand adults are still confused about what the End of Life Choice Act would legalise.

It’s important for all of us to read the End of Life Choice Act and understand what it says before we vote in the binding referendum 2020. It’s also important to pay attention to what the Act doesn’t say, to prevent assuming things that aren’t actually included.

Some details of what the Act would do are tucked away in its Schedule, where it talks about how this Act would change other existing laws. It requires the expertise of lawyers to know for certain how the Act would change other laws. It’s therefore important that we listen carefully to lawyers who have analysed the End of Life Choice Act, such as barrister Grant Illingworth QC whose videos are at Votesafe.nz Quiz Explained and the 200 Lawyers for Vulnerable New Zealanders who identified 35 flaws in the Act. 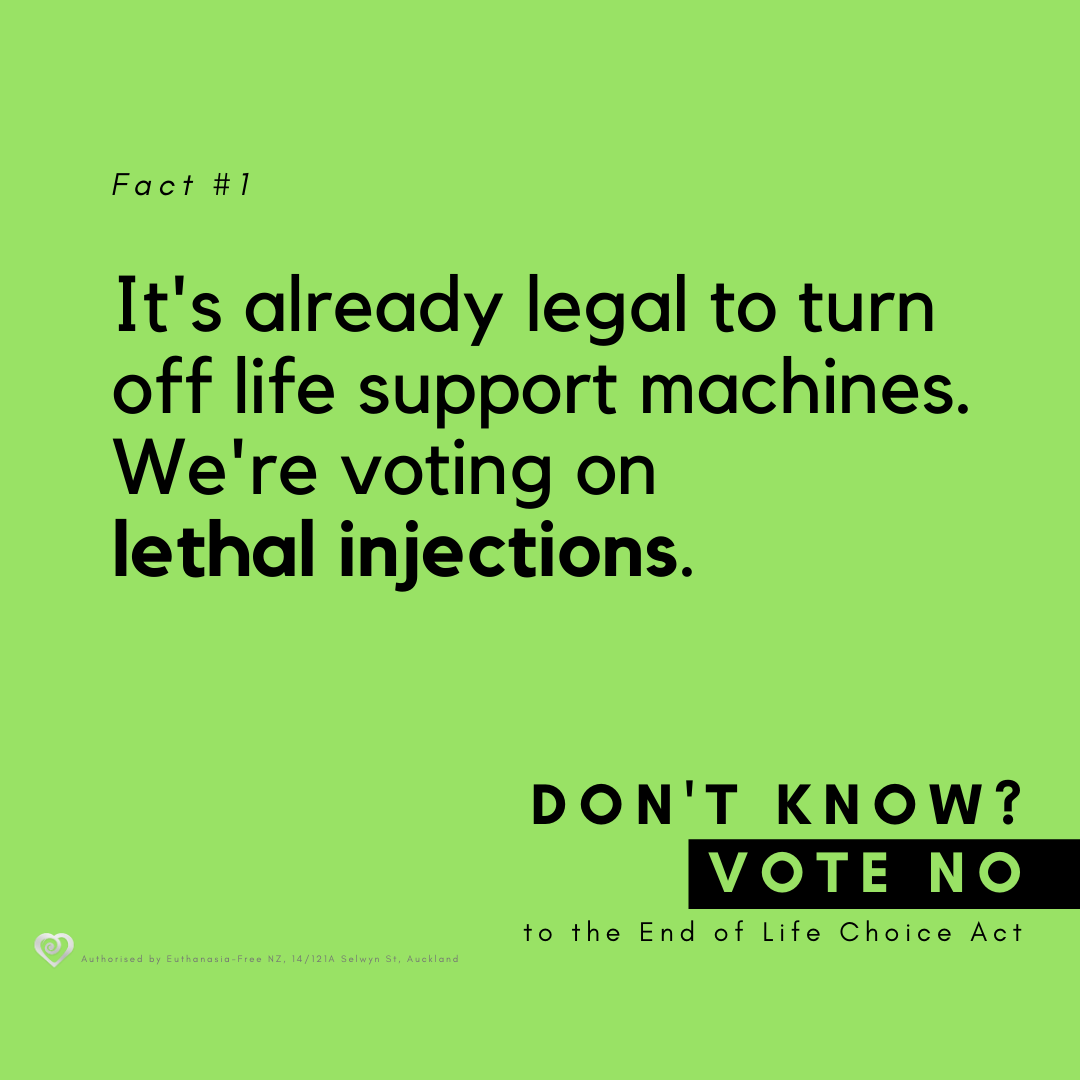 It’s legal to allow natural death. Nobody is saying people should be kept alive artificially at all cost. When life support is removed, the person’s body is allowed to die of their underlying medical condition.

People in a “vegetative state” won’t be eligible under the End of Life Choice Act, since they will not meet the competency criteria in the Act. 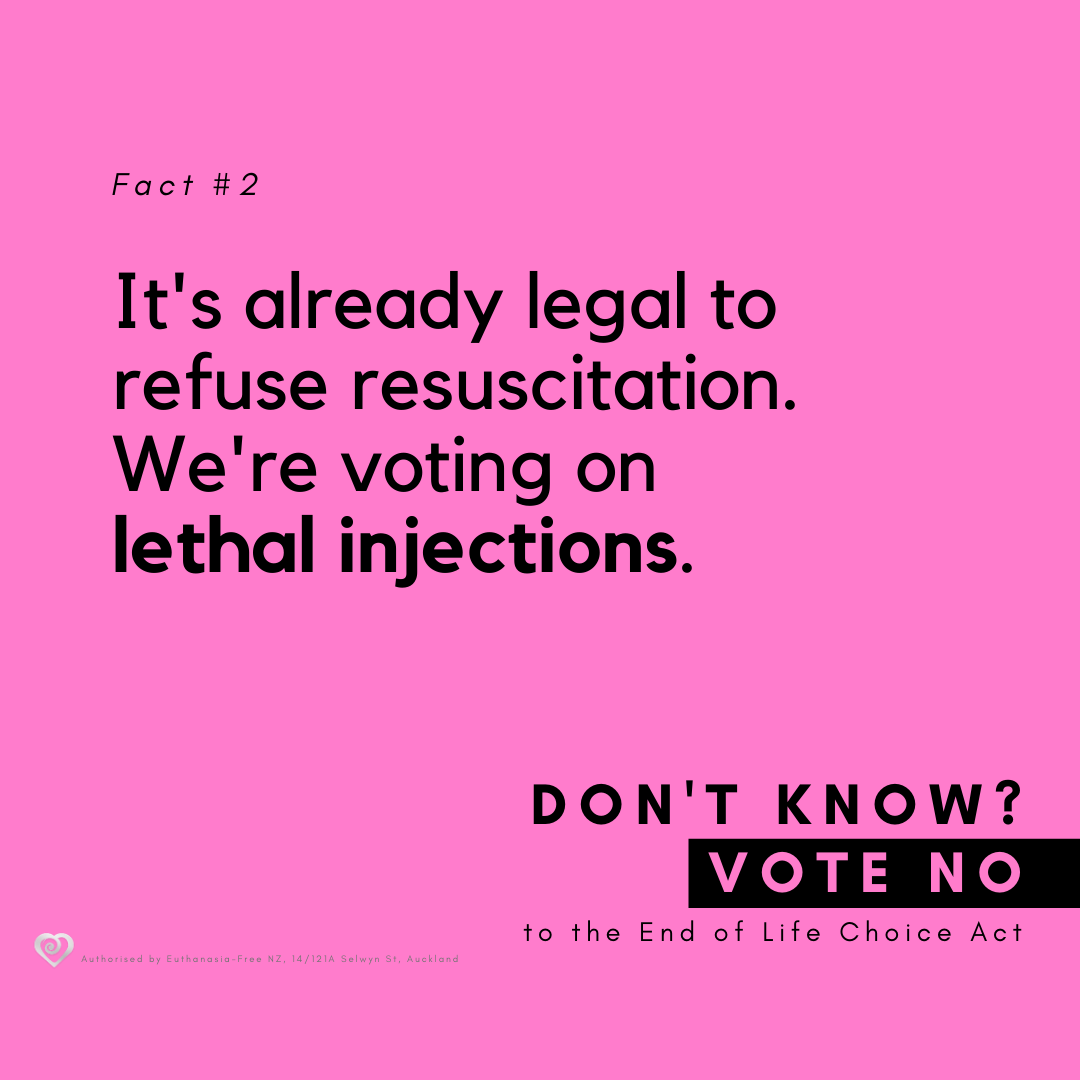 Allowing natural death from an underlying medical condition is ethical and legal.

It’s legal to allow natural death. Nobody is saying people should be kept alive artificially at all cost. When a person is not resuscitated if their heart and breathing were to stop, they would die of their underlying medical condition.

It’s already legal for a person to have a do-not-resuscitate request added to their medical files. 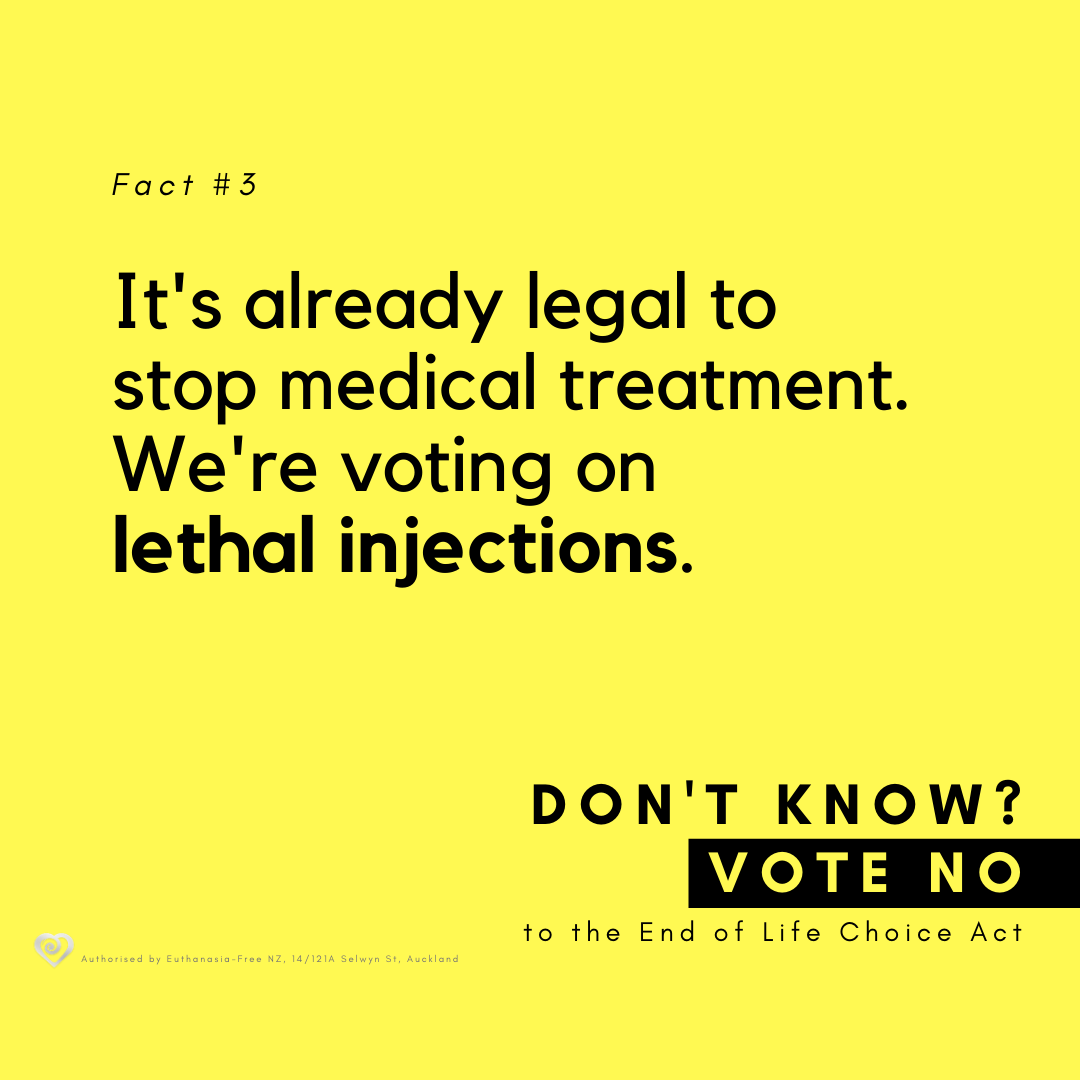 When a person stops life-prolonging medical treatment, they allow their body to eventually die of their underlying medical condition. The intention is to allow nature to take its course. This is not ethically the same as administering a lethal dose with the intention of ending someone’s life. 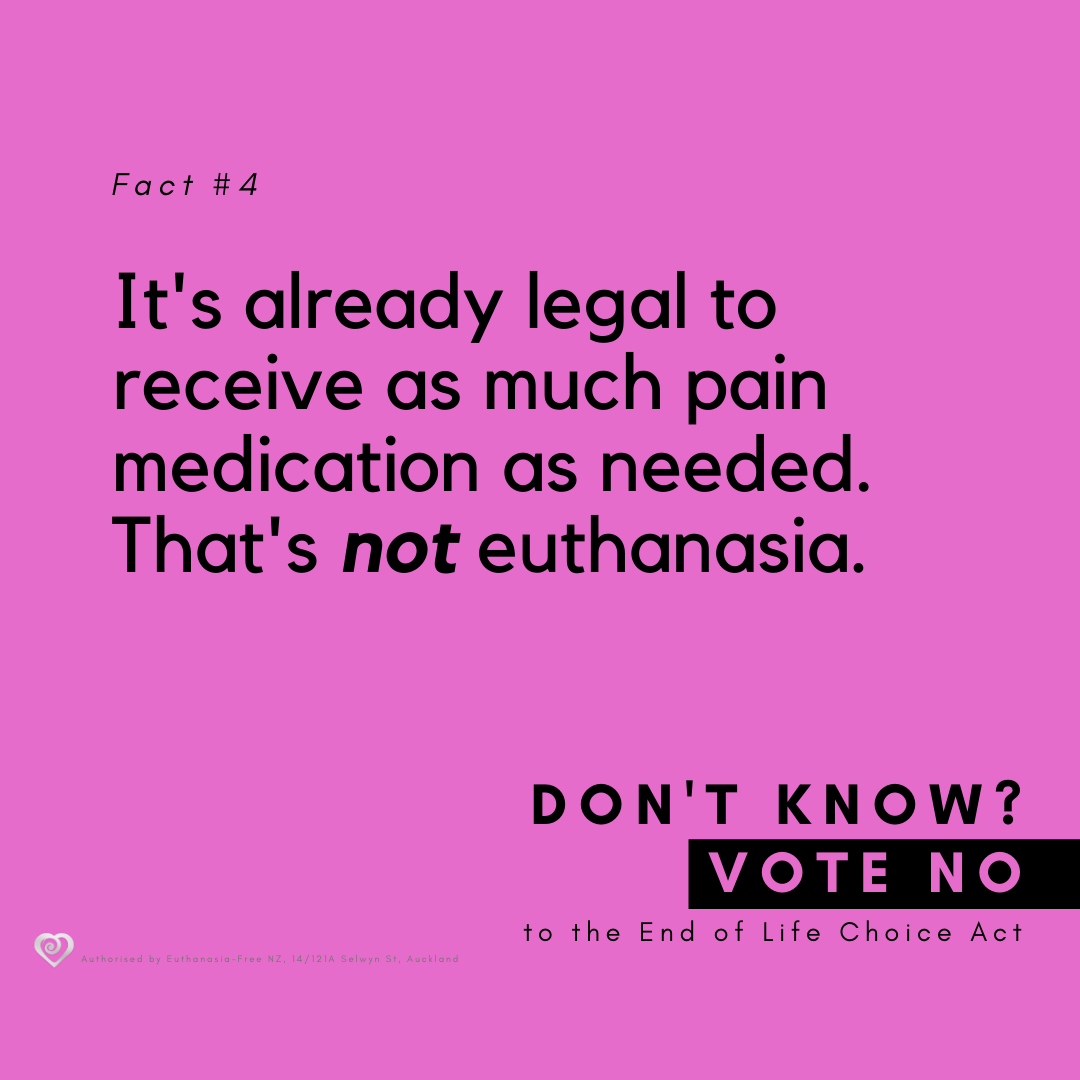 It’s legal for a doctor to give a person as much medication as needed to address their symptoms, even if this may hasten the person’s death as a side effect. If the intention is to relieve symptoms and not to end the person’s life, it is not euthanasia.

It’s also legal for a doctor to give reversible palliative sedation as a last resort, after discussing this with the patient and their whaanau. This involves making a person unconscious for some hours so they are not suffering at all. The person can be brought back to consciousness and their symptoms reassessed, to check whether they still want to be sedated or not. 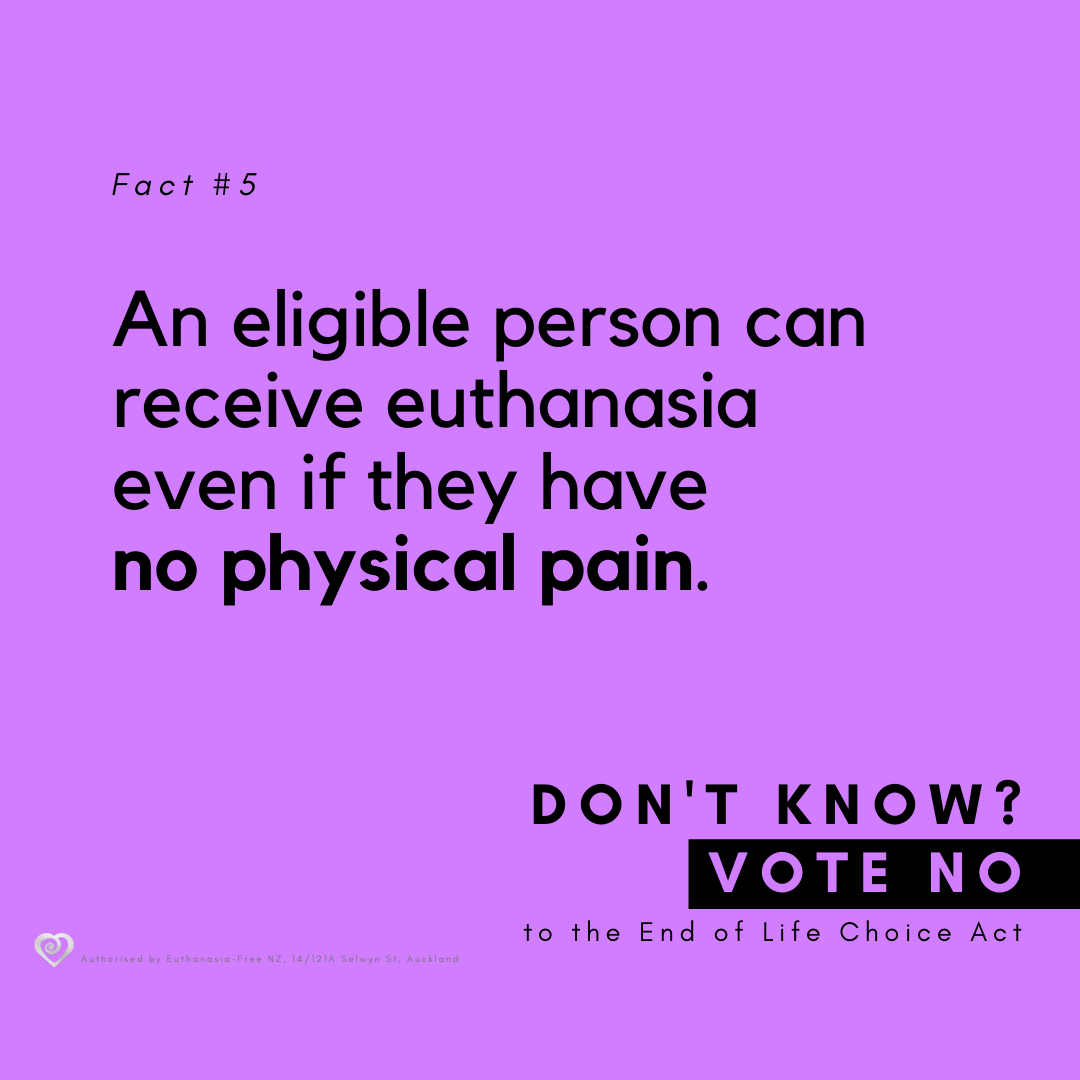 The End of Life Choice Act states that an eligible person needs to experience “unbearable suffering that cannot be relieved in a manner the person considers tolerable”. The Act doesn’t state that it has to be physical pain. It also means that treatment may be possible, but that the person could refuse it. 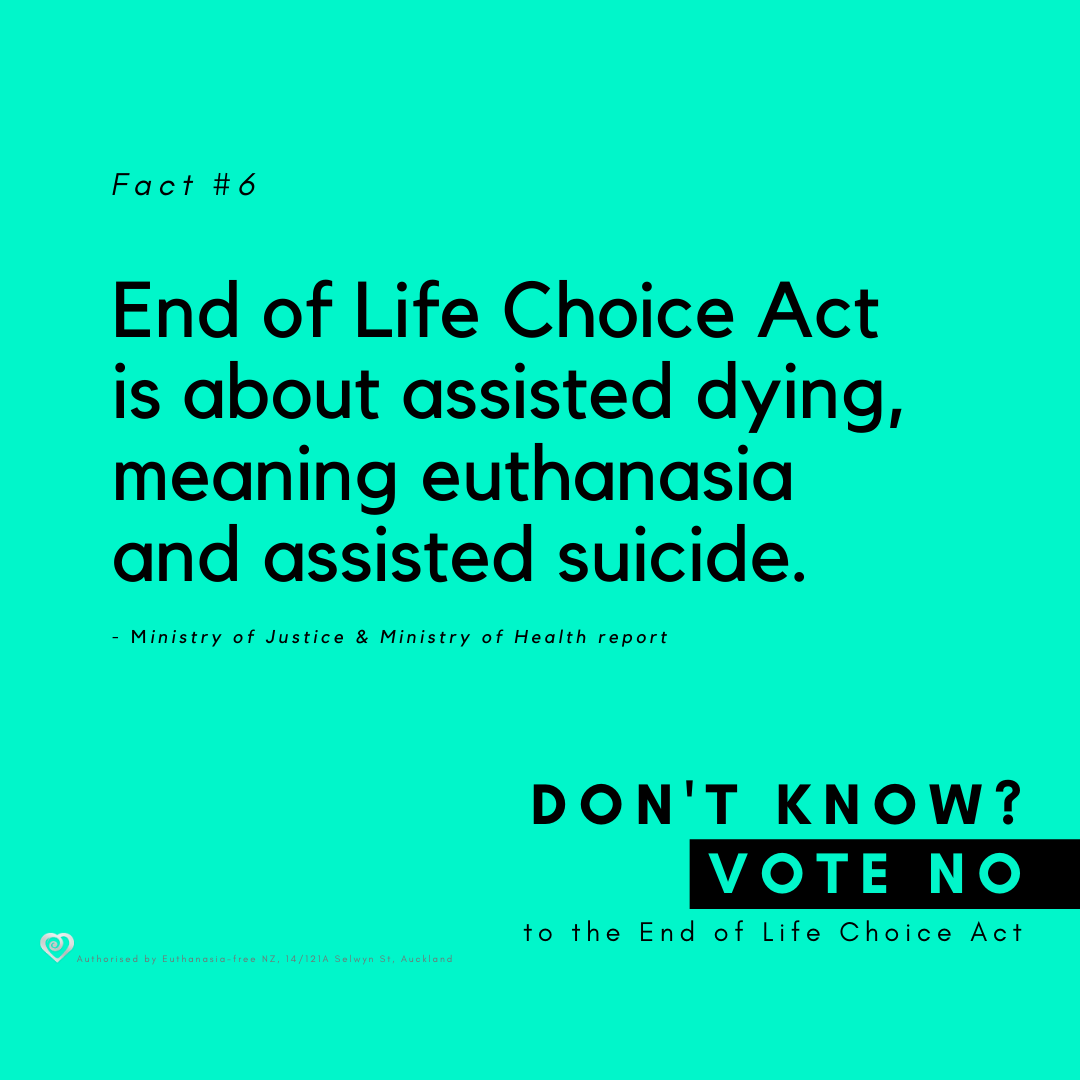 The official definition of assisted dying.

The Ministry of Justice and Ministry of Health confirmed that, “The Bill uses ‘assisted dying’ to refer to both euthanasia and assisted suicide.
“Euthanasia refers to a patient being administered a lethal drug by a medical practitioner.
“Assisted suicide refers to a patient receiving lethal drugs at their request, which they take by themselves.” – Departmental Report on the End of Life Choice Bill, page 2, tiny.cc/mohreport. 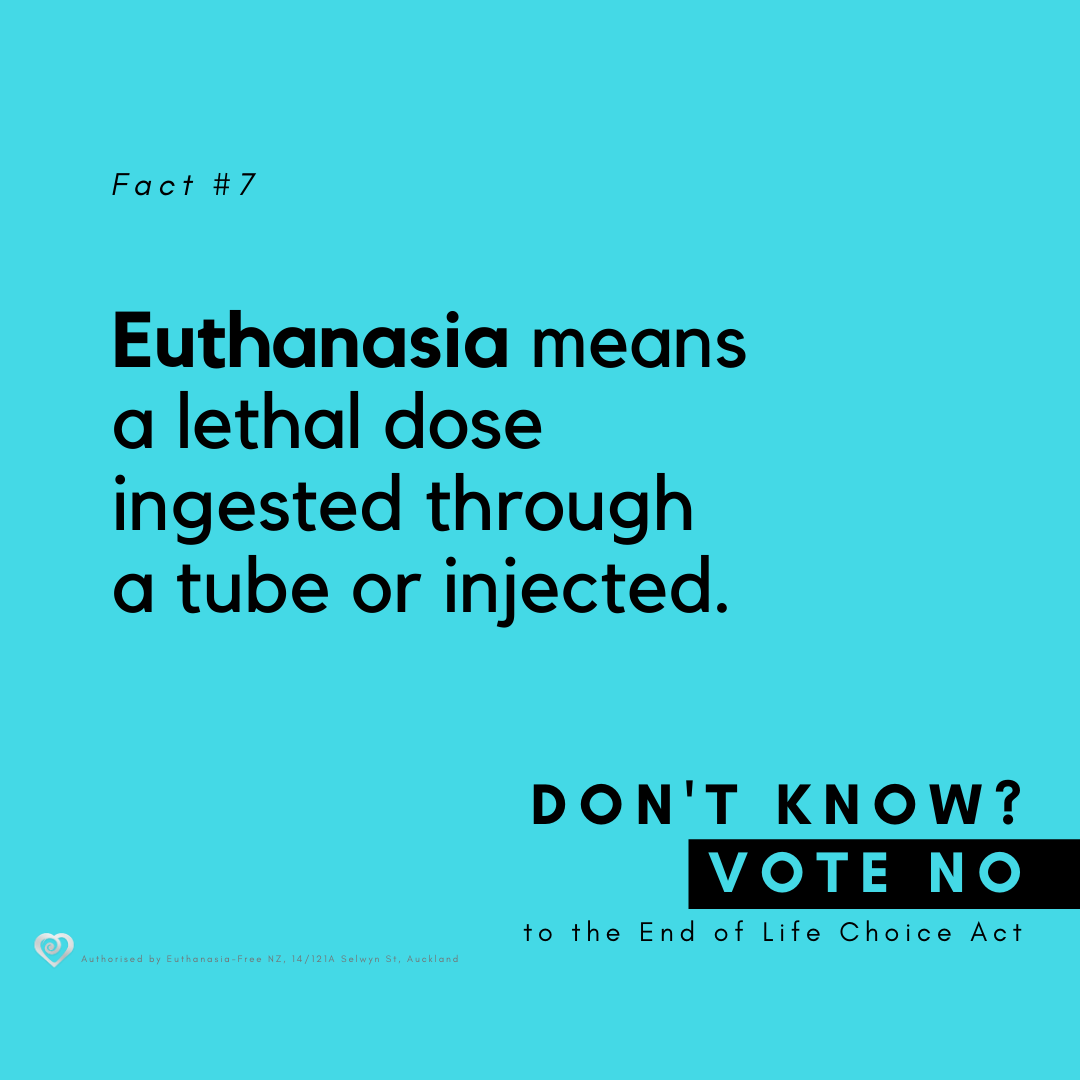 The MInistry of Justice and Ministry of Health confirmed that “Euthanasia refers to a patient being administered a lethal drug by a medical practitioner.” (page 2, tiny.cc/mohreport. The End of Life Choice Act was amended to also allow a nurse practitioner to prescribe or administer the lethal dose. The Act allows two administration methods for euthanasia: The lethal dose could be administered through a tube or by injection, both triggered by the doctor or the nurse practitioner (Section 19 of the Act).

The words, “lethal dose” are used in the definition of “medication” in Section 4 of the Act. 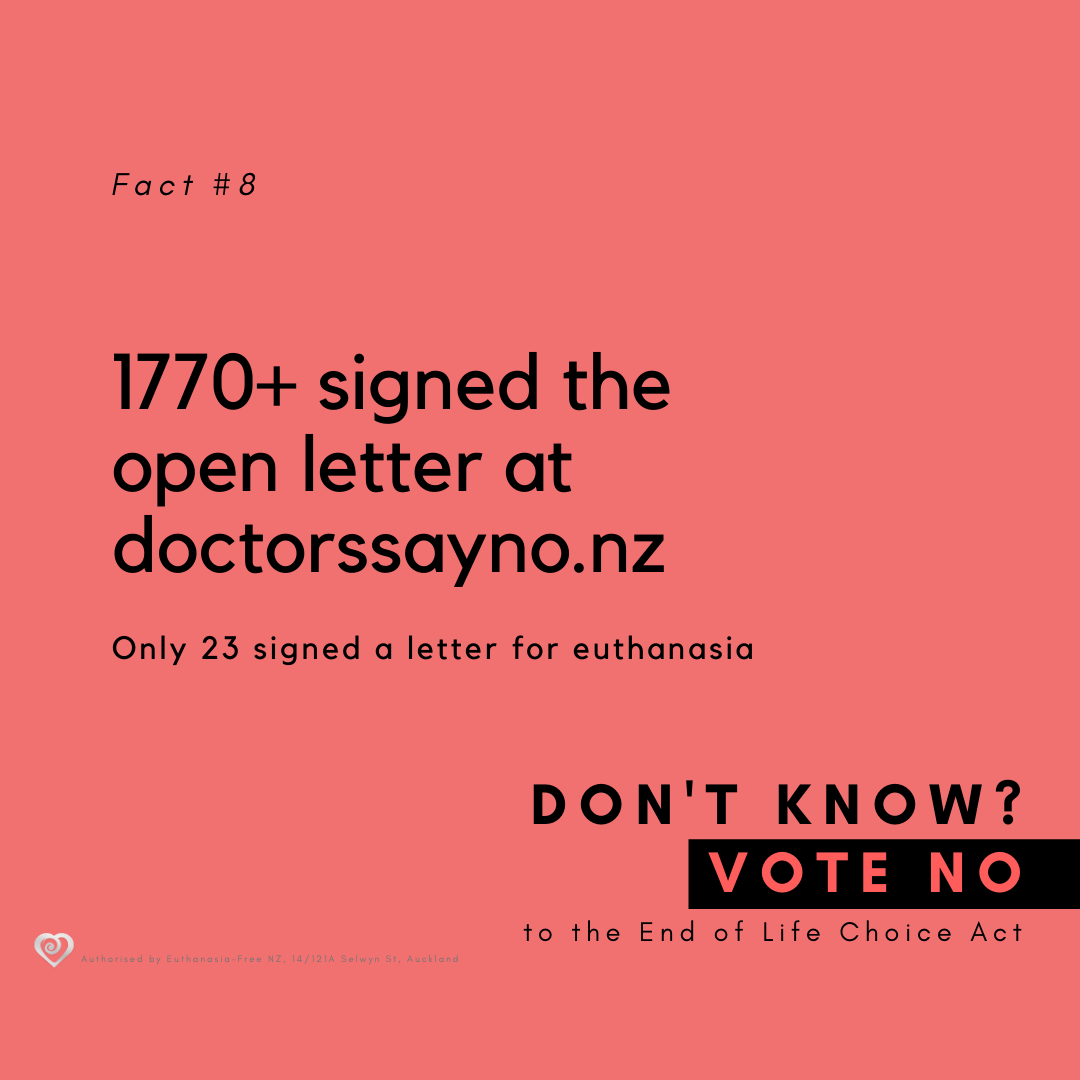 Most New Zealand doctors are opposed to euthanasia.

The open letter at doctorssayno.nz has been signed by more than 1,770 New Zealand doctors. They define euthanasia and assisted suicide as “the intentional ending of life” and write, “Doctors are not necessary in the regulation or practice of assisted suicide. They are included only to provide a cloak of medical legitimacy. Leave doctors to focus on saving lives and providing real care to the dying.”

In contrast, an open letter of doctors who say yes has been signed by 23 people, of which 13 are retired medical professionals.

Studies confirm that most doctors are opposed to euthanasia. According to a 2017 study, 58% of New Zealand doctors were opposed and 37% were in favour.
Experts from the Care Alliance suggested that the 37% is likely higher than the actual percentage, due to issues with the survey’s methodology and analysis.

A 2016 study on the views of Australasian palliative care specialists and GPs with palliative care interest found that 80.1% were opposed to euthanasia, 7.1% were in favour, and 15.9% were undecided.

93.5% of submissions from doctors, nurses and other health care staff who expressed a position were opposed to the End of Life Choice Bill. 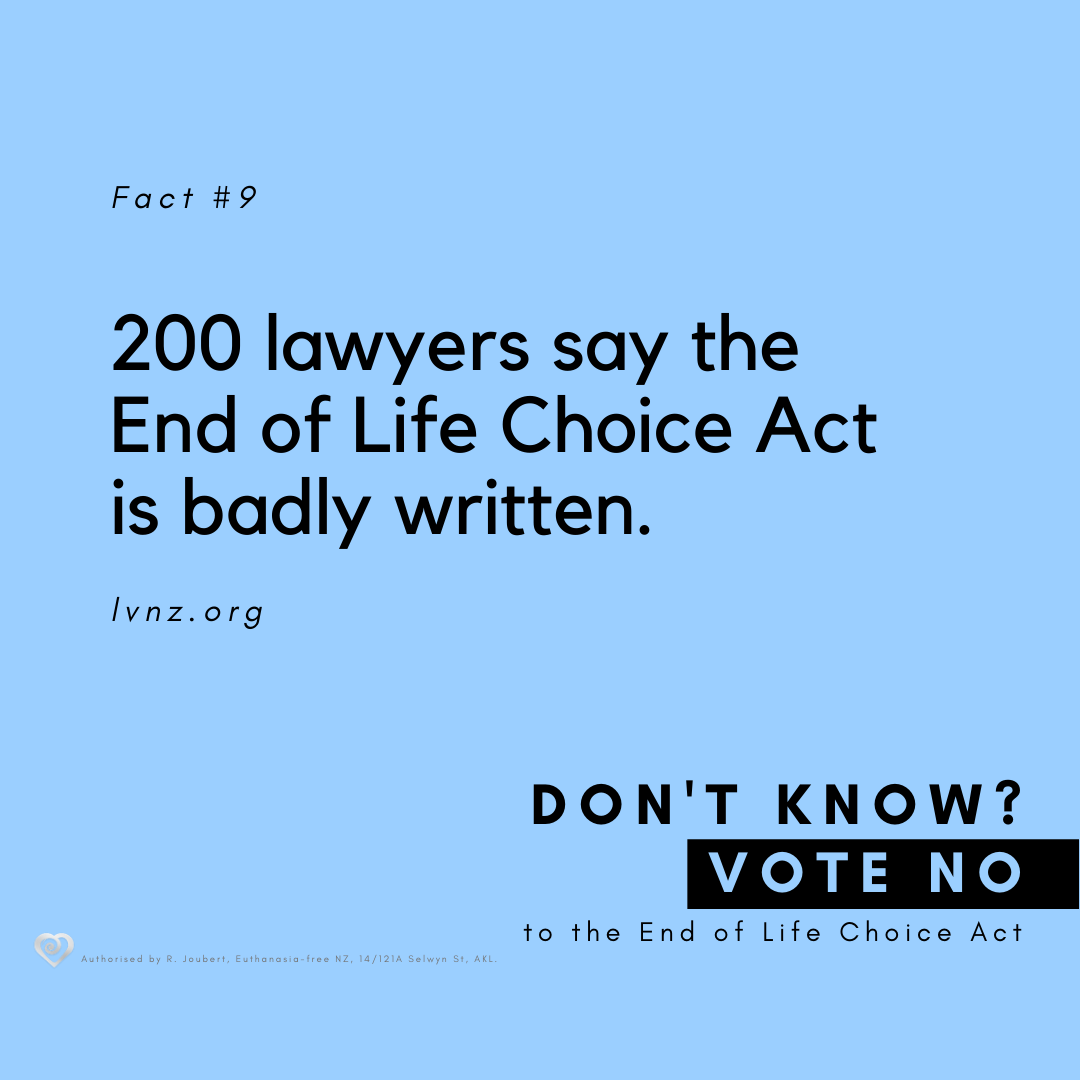 At least 200 lawyers and legal academics signed the open statement which includes warning that they consider the risks involved in the End of Life Choice Act “unacceptably high”. 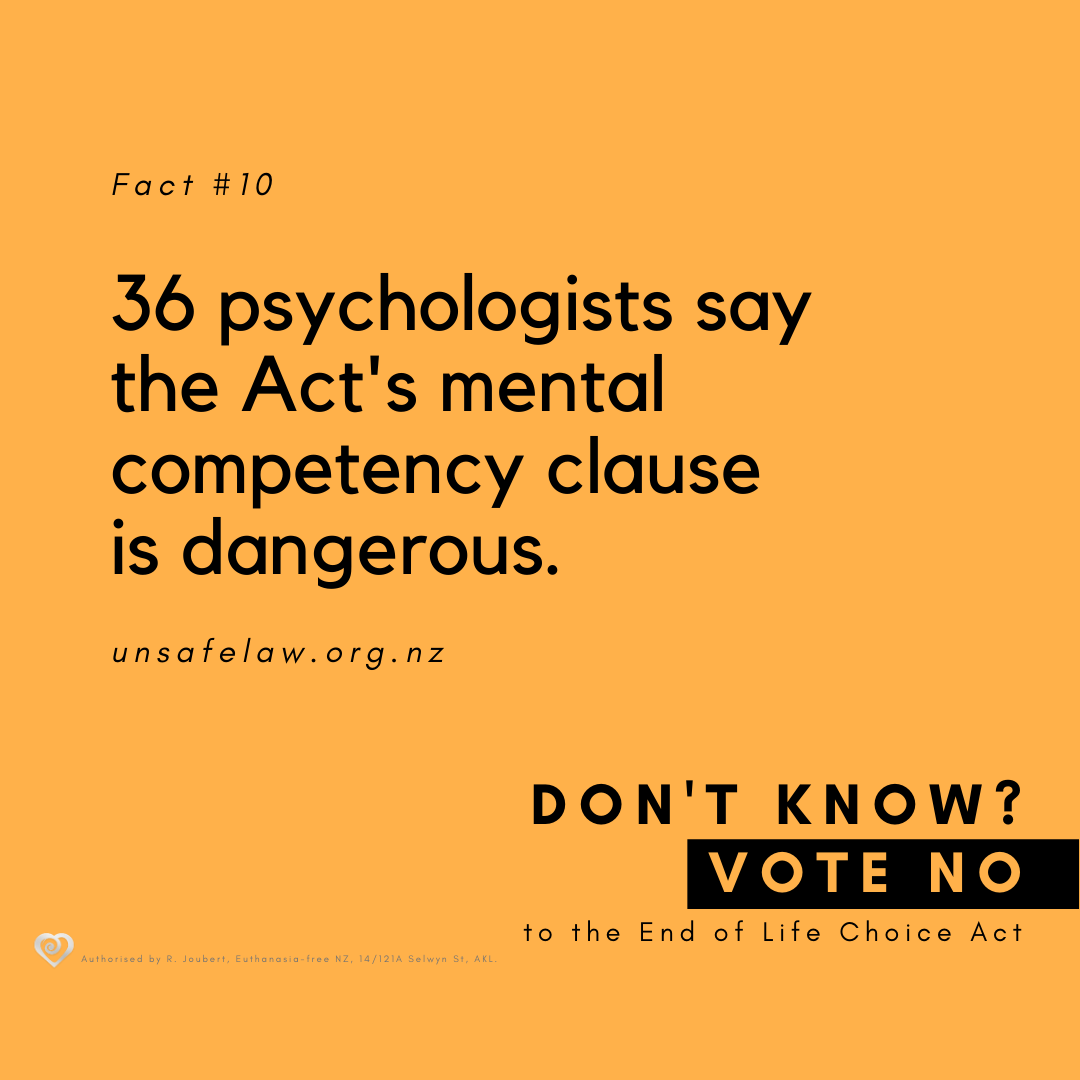 This group of 36 psychologists signed an open letter stating that other New Zealand laws require psychologists to assess whether a person is mentally competent. They are concerned about the fact that the End of Life Choice Act gives this responsibility to doctors.