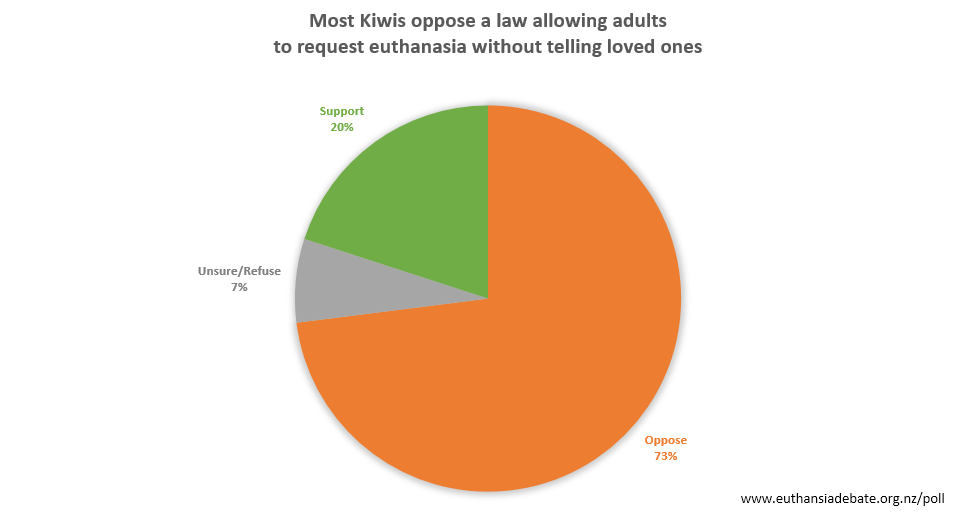 A new nationwide Curia Market Research poll shows the gap between supporters and opponents of euthanasia is narrowing, and that many people withdraw their support when asked to consider some of the details involved in the End of Life Choice Bill, says Euthanasia-Free NZ executive officer Renée Joubert.

“The poll of 1,048 New Zealanders shows that public opinion on euthanasia shifts significantly depending on the level of information provided to respondents,” Ms Joubert says.

Respondents were initially advised that turning off life support and stopping medical treatment is already legal in New Zealand, but that doctors are not allowed to end the lives of their patients.

When asked whether a doctor should be allowed to give deadly drugs to deliberately kill a patient, 57% agreed while 43% either disagreed, were unsure, or refused an answer.

The same people were subsequently informed that doctors are legally allowed to give patients as much pain medication as they need to be comfortable, even if this might hasten their deaths. When then asked whether a doctor should be allowed to give deadly drugs to deliberately kill a patient, even if they are not in pain, the level of support dropped markedly to 27%.

“It seems that a lot of the support for euthanasia is based on avoiding physical pain,” says Ms Joubert. “But the End of Life Choice Bill is not limited to people in pain. An eligible person may only experience emotional suffering which may even be unrelated to their medical condition.”

Only 25% of all respondents supported New Zealand having a law that would allow a terminally ill person to choose euthanasia because they feel they are a burden. “Yet concern about being a burden on family, friends and caregivers was a reason given by 54% of those who were granted an assisted suicide in Oregon last year,” Ms Joubert says.

Similarly, only 35% wants New Zealand to have a law that would allow a terminally ill person to receive euthanasia because they feel depressed or that life is meaningless.

“Clearly the New Zealand public is not supportive of euthanasia in these circumstances. However, no safeguard could prevent an otherwise eligible terminally ill person from requesting euthanasia because they feel they are a burden or that life is meaningless.”

The poll also asked about a provision in the current euthanasia Bill which would allow a person as young as 18 to request a lethal injection without having to tell their loved ones – 73% of all respondents are opposed to this provision.

“Support for making end-of-life decisions without family involvement is much lower than expected,” Ms Joubert says. “The poll result seems to imply that only 20% of New Zealanders regard euthanasia as a purely personal choice between an adult and their doctor. However, there may also be widespread concern about the 18-years age limit.”

These poll findings confirm our experience that many people who initially support euthanasia reconsider their position once they know more about current palliative care options, and once they consider some of the difficult choices lawmakers have to make about any euthanasia legislation,” Ms Joubert says.  “In short, the more people know about euthanasia and this bill, the less they like it.”

Euthanasia-Free NZ therefore calls on MPs to vote against the End of Life Choice Bill at its Second Reading.

The full report is available below at euthanasiadebate.org.nz/poll.

Below are the questions (in the same order as in the media release), the results and a brief discussion on each question. 1,048 New Zealanders were polled by phone.[1]

This finding is consistent with the 2017 Curia Market Research Poll[2] that found while 68% of New Zealanders support undefined concepts such as ‘assisted dying’[3], support drops to 55% when respondents hear that it would exclude end-of-life choices such as turning off life support, do-not-resuscitate orders, or stopping medical tests and treatment.

The proposed End of Life Choice Bill isn’t limited to people in physical pain. It requires only that an eligible person “experiences unbearable suffering”, which may be emotional rather than physical suffering. This suffering may even be unrelated to the person’s medical condition.

Due to the improvement in palliative care and pain management in Western countries, most patients today should die without physical pain. A 2016 study found that the majority of people in the terminal phase experienced no pain whatsoever, although 4.2% required the intervention of palliative pain relief.[4]

A 2011 study found that the avoidance of physical pain may no longer be the central motivation for desiring euthanasia, but that patients’ definition of ‘unbearable suffering’ and reasons for requesting euthanasia now revolve around psycho-emotional and existential factors such as feelings of meaninglessness, loss of self and being a burden on others.[5] 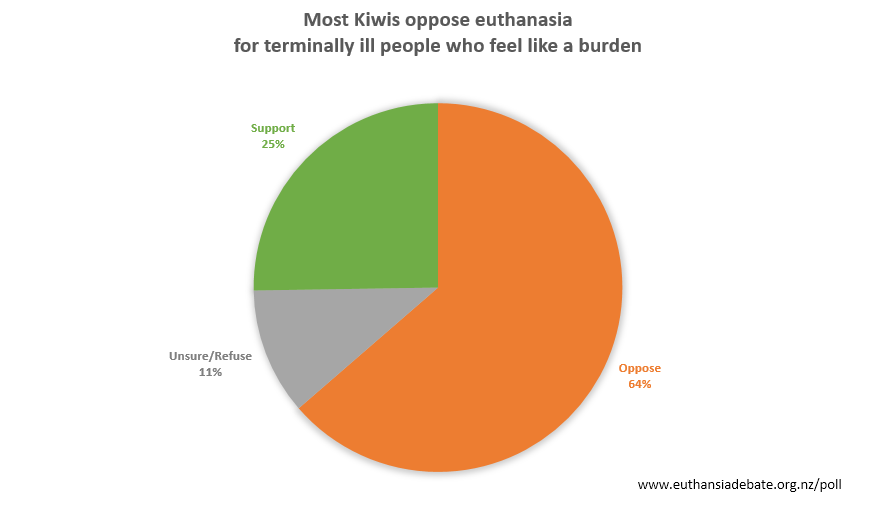 3. Would you like New Zealand to a have a law that would allow a terminally ill person to receive a lethal injection because they feel they are a burden?

If the End of Life Choice Bill were to pass we could expect some terminally people to request euthanasia because they feel they are a burden. A 2007 study found that dying patients often feel a sense of burden.[6]

In Oregon assisted suicide is available to terminally ill people who are expected to live for six months or less. Concern about being a burden is not mentioned anywhere in the legislation. Yet according to the latest official report from Oregon, 54 % of terminally ill people who received lethal drugs in 2018 cited concern about being a burden to family, friends and caregivers as a reason for doing so.[7] 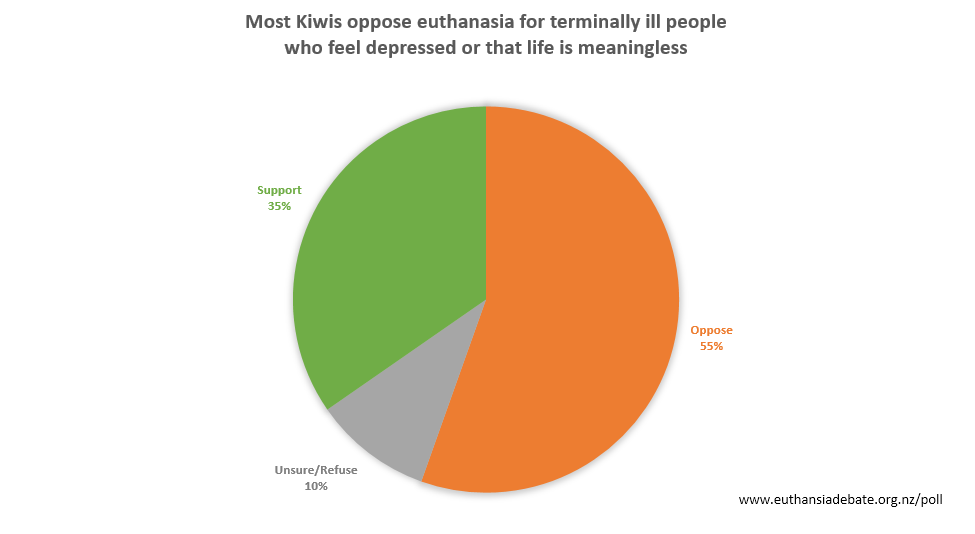 4. Would you like New Zealand to have a law that would allow a terminally ill person to receive a lethal injection because they feel depressed or that life is meaningless?

If euthanasia were to be legalised we could expect some terminally ill New Zealanders to request it because they feel depressed or that their life has become meaningless. A 2017 study concluded that depression and a loss of meaning in life play key roles when people with advanced cancer wish to have their deaths hastened.[8] Medical literature suggests that major depression is present in 25% to 77 % of terminally ill cases. However, depression tends to be underdiagnosed and undertreated in patients with terminal illness.[9]

The poll asked respondents whether they want New Zealand to have a law that would allow a terminally person to receive euthanasia because they feel they are a burden or because they feel depressed or that life is meaningless.

There is a difference between the criteria that would make people eligible for euthanasia and the underlying reasons why they may request it.

As lawyers would know, a piece of legislation may allow for more than what is stated explicitly. It’s important to also consider possible loopholes.

If the End of Life Choice Bill were to become law, it would allow some people to receive euthanasia without first telling their loved ones about it. In Section 8 (e) and (f) the Bill requires a doctor to “encourage the person to talk about their wish with others” but also “ensure that the person knows that they are not obliged to talk to anyone”.